The "Cover" Story: What's He Trying To Say?

Below (and above on the banner) is the final cover design, commissioned by Water Street Press, for the book to be published later this summer. I think it does a brilliant job of capturing the overarching – you could say “heady” – themes of the novel. Here's why. 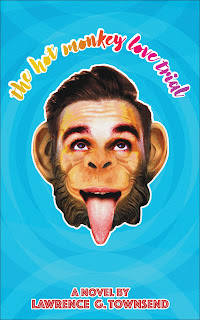 Think of the cover as an easy-to-read thermometer displaying a temperature that’s diagnostically accurate and definite, yet without so much as a word, much less a number. What you see is no ordinary fever.  Clearly there’s something wrong with the patient, but he just doesn’t seem to know it or care.  Why?

By the way, the headshot is not supposed to look like the protagonist, John Bertram (“Bert”) Gropes whose name was obviously mutated and recombined from the name John Scopes of the original Monkey Trial. Although Bert is endowed by genetic tampering with a unique and single gene from a monkey indigenous to the Caribbean’s Isle Libido, Bert’s resemblance to a monkey is – shall we say – more subtle than the guy on the cover. After all, it’s only one powerful gene unique to a monkey that he carries.

The owner of the head – let’s call him “Humonkey Dude” – is endowed with more obvious missing-link features than Bert. Note how the vainglorious human in Humonkey Dude has attempted to mask his simian attributes, but utterly fails.  One can only imagine what the rest of his body looks like. There are a number of “tell-tail,” if you will, morphological features that allude to the whole story.

The hair on top looks pretty normal, at least in isolation. If you were to crop the image from the forehead up, you’d think he might turn out to be a good-looking guy. But his beard only goes so far in in covering his mega-monkey-like maxillofacial protrusion, the kind that people can’t stop staring at, no matter how hard they try, when casually striking up a conversation with Humonkey Dude. And there’s no toning down his nose that looks like it can easily smell that banana daiquiri lip balm you’re wearing four and a half banyan trees over.

Let's not forget to mention those water-jug ears. I read where super-stud Daniel Craig, who plays a convincing James Bond, is self-conscious about the size of his ears. I can even see Humonkey Dude emerging from the surf, dripping wet, shirtless, causing every hot-blooded, bikini-clad beach babe-oon to swoon. Even Barack Obama said, when announcing a federal anti-bullying initiative, that he was teased in grade school about his big ears.  I would not be going out on a limb to say that, compared to what others say who are running for high office these days, Humonkey Dude’s looks imbue him with no less than industrial-strength Presidential gravitas.

The tongue, however, is the key to the whole cover, and perhaps the novel itself. It’s possible that the seemingly permanent panting pose Humonkey Dude strikes is due to a rogue Miley Cyrus gene that could have been inserted into his zany zygote way, way back when. But that’s not it.  You have to ask yourself: What is causing him to express such passionate feelings with that patriotic unfurling of his flag? It’s what he sees. He’s looking up at the words “The Hot Monkey Love Trial.” Clearly he’s moved by the title and what it promises. The Hot Monkey Love Trial will set him free.
Posted by Unknown at 8:37 PM