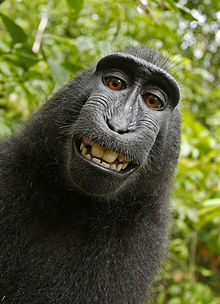 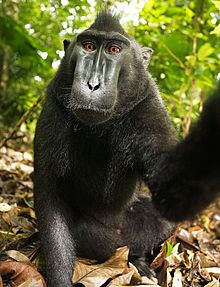 Who should own the copyright in a selfie that is composed, art-directed, and shot by a monkey?  A new lawsuit has been filed here in San Francisco federal court by PETA seeking to have Naruto, the monkey, declared the “author” of his smiling selfie gone viral. What’s more, the plaintiff in Naruto v. Slater wants the monkey to be designated the beneficiary of all royalties earned by the popular photographic image with proceeds to benefit the reserve where Naruto lives.

The photos were taken in 2011 when British nature photographer, David Slater, was on the Indonesian island of Sulawesi. He’d set up the camera and a tripod to photograph the macaque monkeys but, as monkeys are wont to do, Naruto started examining and playing with the equipment. The photos were later published by Slater in his book Wildlife Personalities, and Slater claimed to own copyright in the monkey selfies.

Slater’s position is that he set the whole thing up and therefore was the “mastermind” behind – and therefore the “author” of – the photos.  In fact, Slater said he left the camera unattended and hoped the monkeys would do what they did. Taken to its logical extreme, however, that may be like saying you locked Tolstoy in a room and hoped he’d write a novel, making you the “mastermind” behind War and Peace (although it is a much more elegant solution than the proverbial million monkeys with a million typewriters).

There is at least some support for Slater’s position. In the 1884 case of Burrow-Giles Lithographic Co. v. Sarony, the U.S. Supreme Court held that photographs are subject to copyright protection because of the artistic decisions made by the photographer in taking a portrait shot of Oscar Wilde. Those decisions include choosing the camera, lighting, angle, and wardrobe of the subject.  Maybe only the first two of those items help Slater’s claim of ownership.

On the other hand, Naruto selected – whether knowingly or not – such things as the camera angle, timing, level of focus, and framing of the photograph.

Meanwhile, the Copyright Office – which is considered authoritative but whose interpretations of copyright law are not binding on a federal court – has just recently pronounced in its Compendium of the U.S. Copyright Office Practices (3rd Edition) that any original work of authorship, including a photograph, can be registered “provided that the work was created by a human being.” The Copyright Office cites photographs taken by monkeys and murals created by elephants as examples of such works it views as created by nonhumans and not eligible for ownership.

In the photos taken by Naruto, shown above, it’s hard not to see the hand, complete with an opposable thumb, of an artist at work.The smiling selfie shows a steady touch and a nicely composed headshot highlighting a set of choppers that, make no mistake, would cause even George Washington to go bananas.  The second shot, so stoic and determined, suggests Naruto intended to conjure elements of American Gothic, but without the whole monkey on your back of having to keep the farm going, or having to pay the mortgage or, for that matter, finding yourself armed with only a puny pitchfork while facing, straight ahead, nothing less than a mountain of 1930’s Midwestern existentialism to sort through. Even if Naruto is a not the copyright owner, and likely no one is, he made judicious artistic choices that would best capture his personal worldview.
Posted by Unknown at 10:07 AM