QUESTION: Can you identify the one sentence in this post that is fictional, i.e., that hasn’t happened or isn’t happening right now in the biotech world? Think carefully before answering. 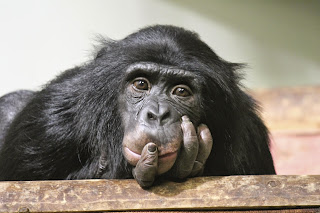 A startup in San Francisco, Cambrian Genomics, is the first to assemble, sequence, and “laser-print” customized DNA, allowing customers to edit and create new species of plants and animals. The company has major Silicon Valley venture funding.
Here’s how Cambrian processes an order for “special-order” genes. First it adds DNA chemicals millions of times onto tiny beads layered onto glass with what could be described as a “god machine” that assigns a fateful color to each DNA chemical. Then a laser “analyzes” the colors, and it recognizes the correct ones by separating them from the incorrect ones. The chosen strands are “printed” into a powder on a small plastic plate that may be inserted into the cells of an organism.
One company using Cambrian technology, Petomics, is making a probiotic for dogs and cats that makes their poop smell like bananas. The technology was also behind a Kickstarter crowdfunding startup that makes plants that glow in the dark. The sponsors claim it is the first step in fully replacing the traditional lightbulb by creating “sustainable natural lighting” made from synthetic biological material.  After the project was fully funded, Kickstarter announced its new policy that it will not promote funding for genetically-engineered organisms.
On the drawing boards are cow-free milk and “animal-free” meat. But if the meat doesn’t come from animals, where does it come from? And does that mean we can also create animals with something other than good old-fashioned flesh? Also on the drawing board are Bio-BUDs, so named because they are biological “blow-up dolls.”
Creepy.
The founder of Cambrian Genomics, Austin Heinz, wants to make “totally new organisms” that have never existed. He believes we’re not far off from Mom and Dad getting in on the act. Because the technology will let parents digitally design their children, that twinkle in their eye may prove to be the blinking cursor on their computer screen.
At present the company does a check before shipping it out to make sure that what it has created for the customer isn’t Black Plague or some other known and readily-identifiable disaster in the making. As orders increase, the company won’t have time to do that, but it expects that it should be able to ship to a third-party vendor who can provide that service.
“It is the most powerful technology humans have ever created,” Heinz is quoted as saying. “Hydrogen bombs can destroy whole planets, but this is a technology that can create planets. This is the greatest human achievement of all time — the ability to read and write life, because that’s who we are.”
I understand – or I’m coming to slowly understand – that life can be “written” by creating and editing DNA, including that of humans. When speaking of “reading” people, I’ve only understood that to mean the ability to watch and decipher the code behind another’s words, gestures, and actions, making it possible in an imperfect science to come to conclusions about that person’s true nature. But what if “reading” people, or experimenting with their "recipe,"were as easy as reading, writing, or revising a cookbook?
ANSWER: The Bio-BUDs are fictional. In the novel the company Primal Urge is developing a product line by that name. The rest of it about Cambrian Genomics is all true.
Posted by Unknown at 9:09 PM